Fifty years ago this week Martin Luther King led the March on Washington for black civil rights. Look at the aerial photos of the 200,000 participants in the rally, stretched out in front of the Lincoln Memorial, down the Mall, and around the Reflecting Pool. Now imagine double that crowd. That’s how many blacks have been murdered, mostly by other blacks, since King made his inspirational “I have a dream” speech. 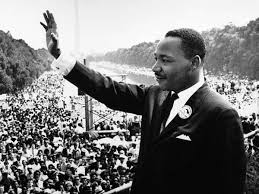 As thousands more gather in Washington this week to mark the anniversary of that day that held so much hope, they must ask, “What happened to that dream? Why is so much of it a nightmare?” Much of the answer is found in the perverse persons on the podium who’ve worked against all that was right in King’s vision.

In 1963 laws in many states actually mandated segregation of blacks, in schools, public facilities, retail outlets, you name it. And “separate” was never “equal.” Blacks were forcibly denied most opportunities to realize the American dream.

Worse were the actually racist attitudes toward blacks, the belief that they really were genetically inferior, degenerate, or just too stupid to take care of themselves. Best to keep them separate from genteel white culture lest they ruin it.

King voiced one of the most inspirational and aspirational speeches in American history.

In this world, King voiced one of the most inspirational and aspirational speeches in American history. The highlight was: “I have a dream that my four little children will one day live in a nation where they will not be judged by the color of their skin but by the content of their character.”

That should be the moral ideal for all. It’s not accidents of birth that are important. Rather, we should take our pride in what we as individuals make of ourselves.

Since King’s speech, laws aimed at keeping blacks segregated have been struck down. Sadly, they were replaced by laws giving blacks special privileges. At first these were meant to make up for the past wrongs. But they soon created an entitlement mentality among blacks on the unspoken assumption that blacks can’t make it on their own and, thus, require special privileges.

With a few exceptions, explicit racist attitudes among whites have disappeared; whites were instrumental in electing the first black president. But black leaders have built on the entitlement mentality. They’ve foisted on their fellow blacks a world view based on black versus white, us versus them. They blame crime, broken and fatherless homes, drug abuse, and most of the miseries of life on a zero-sum game in which blacks suffer because whites haven’t given enough. Too few focus on the individual vices, perpetuated by culture, that are the real root problems. The demagogic leaders relegate virtues such as personal responsibility, self-discipline, and getting ahead through hard work to occasional throwaway lines at best. Too few stand up against it (but here's to you, Bill Cosby!).

Consider a few of the morally corrupt usual suspects--self-proclaimed black leaders some of whom are keynoting the 50th anniversary rally to mark Dr. King’s march.

Jesse Jackson made a career as a shakedown artist. He demanded that businesses hand over money to his Operation PUSH, a financial and fraudulent mess, under the threat of being denounced as racist and subjected to black boycotts. Jesse can be found in front of the camera to exploit any situation into which he can insinuate race.

Al Sharpton has incited anti-Semitism. He was the leading loudmouth in the case of Tawana Brawley, a black teen who lied about being raped and abused by white police. Al still hasn’t apologized for his role in that hoax. Al can be found, standing next to Jesse, at any photo op to create racial divisions.

Barack Obama, as the first black president, could have made transcending race Job One. He could have used the bully pulpit to promote a values revolution in the black community. Instead, he has promoted the statist programs that have perpetuated its economic misery.

At the 1963 march, the great singer Marian Anderson inspired the crowd with “He’s Got the Whole World in His Hands.” As a child I listened to her rich contralto on TV at my grandma’s house. By contrast, Obama has honored at the White House rapper Jay Z. The lyrics of his songs, replete with references to “niggas,” “motherfuckas,” and “shit,” would perhaps be appropriate for the 2013 event featuring Jesse and Al.

Speaking of gangsta culture, in the week before the 50th anniversary of the march, two black teens and a white teen shot to death a white jogger in Duncan, Oklahoma because they were “bored.” In Spokane two black teens beat to death an 88-year-old white World War Two veteran. No sign of Jesse or Al on the scene.  But, then, they’ve been equally unconcerned about some 400,000 blacks murdered by other blacks since King’s march.

Those gathered in D.C. this week should celebrate the knocking down of legal barriers to black opportunity since Dr. King’s time. But they must also reject the race-based world views perpetuated by their new oppressors. Whatever their race, they must accept the morality of individualism that will allow them to build strong moral characters so they can both prosper as well as take pride in their achievements.
----
Hudgins is director of advocacy and a senior scholar at The Atlas Society.